C'mon is the eighteenth studio album by B'z, released on July 27, 2011. The album was issued in both a normal and a limited edition CD and DVD package that came bundled with a bonus DVD containing the full music videos for the title song and singles "Sayonara Kizu Darake no Hibi yo" and "Don't Wanna Lie". In addition to the previously released singles and the latter's B-side "Homebound" being included, the album featured ten additional tracks including a hard rock re-recording of "ultra soul" with the year appended as a subtitle. This version would prove to be close to what the band had performed at LIVE-GYM concerts in the years since its release.

Production on the album commenced in May 2010 while both Tak Matsumoto and Koshi Inaba were simultaneously managing their solo activities for the year. Recording would last roughly a year, with the sessions resulting in a number of unused tracks that were fully produced at the time but went unreleased. Apart from the singles that were first collected on B'z The Best XXV 1999-2012, none of the album's songs have appeared on later compilations since its release.

The title for the album originated in the mentality that formed following the 2011 Great East Japan Earthquake disaster. Recording stalled in its wake with the band only returning to the studio weeks later and emerging with the hopeful title song "C'mon". The album's history and the band's struggles following the disaster were recounted by Koshi during B'z LIVE-GYM 2011 -C'mon- that followed the album's release. The band also held their third tour of the United States and Canada with B'z LIVE-GYM 2011 -long time no see- along with a charity show in Los Angeles with American rock band Linkin Park dubbed Music for Relief's Secret Show for Japan, their first festival appearance at TV Asahi Dream Festival 2011, and the premium one-off show Pepsi NEX presents B'z 1DAY LIVE.

Upon release, C'mon debuted at the top of the Weekly Oricon Album chart and continued the band's streak of albums to do so dating back to 1990's release of RISKY. In its first week, the album was certified Platinum for sales of 272,397 physical copies. It would be the second highest-selling album for July despite being released with only days to spare in the month, the fourth best-selling in August, and ranked at number 11 for the year. To date, C'mon has sold over 383,428 copies in physical form. In 2018, the album was reissued as a two vinyl set made available to visitors of their thirtieth anniversary public exhibition entitled "SCENES" alongside all other studio albums to that point. 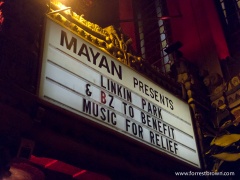 The marquee outside of The Mayan Theatre promoting the B'z and Linkin Park charity show that followed the 2011 earthquake disaster.

Recording got underway in May 2010, two months after the two had wrapped up their 2010 LIVE-GYM tour. Despite the fact that both were busy with their respective solo projects—Tak's TAKE YOUR PICK with Larry Carlton that would go on to win him his first Grammy Award and Koshi's Hadou—they had the time to meet up occasionally in the studio and formulate ideas to put together new tracks. Usually, the band's approach began with constructing and defining a set theme, but this time around they composed new songs without one in mind. Ultimately, the result was not a set theme but more of a mindset: "C'mon".

During the full recording period, a total of eighteen tracks were produced with only thirteen making the album proper. An out-take from the sessions titled "Kimi wo Ki ni Shinai Hi Nado" would find its way onto the next studio album EPIC DAY four years later in 2015. The band were in and out of the studio with full-time production resuming in November 2010 as their solo activities came to a conclusion. The sessions would be some of their most fruitful, having produced more songs than any other album in their modern era.

As the band were in the studio and were promoting their two planned singles, the 2011 earthquake disaster struck Japan on March 11. B'z were in the studio at the time and later noted in interviews that the disaster affected their approach to the final songs on the album. The title song was written and recorded after the disaster, and was seen as an appropriate title for the overall work as it expressed their attitude moving forward. The incident led to a complete stoppage of recording for a brief time, with the band figuratively separating the recording sessions as "pre-earthquake" and "post-earthquake". Additionally, as production wrapped, the band had some difficulty with the track listing and ordering the songs appropriately.

Weeks after the disaster, on a commemorative edition of Music Station, the band would perform a special version of "Brotherhood" with slightly altered lyrics to be more mindful of the disaster. The band later teamed with American rock band Linkin Park for a special charity show to help those affected by the earthquake disaster. Tickets were not available for direct purchase, however; instead, a fundraising platform was used in which those that garnered $500 in donations would be given a pair of tickets. The event, dubbed Music for Relief's Secret Show for Japan, saw B'z perform mostly English songs including the debut of the English rendition of "Ultra Soul".

The meaning behind the album's title and the origin of its title song was explained by Koshi to the crowd during B'z LIVE-GYM 2011 -C'mon-'s dome portion:

Just days prior to the album's release in Japan, B'z embarked on their third tour of the United States and Canada: B'z LIVE-GYM 2011 -long time no see-. Although the two occasions coincided, no songs from C'mon were performed other than single "Sayonara Kizu Darake no Hibi yo" being included in the encore. The finale was streamed live, worldwide, from Club Nokia in Los Angeles, continuing the band's streak of streaming their overseas shows dating back to 2002.

The actual release for the album was accompanied by a slew of commercials. They varied in content, with one featuring the band performing a short acoustic rendition of the title song in a meadow. A full music video for the song was also filmed around the same time and features similar imagery. This video was uploaded to the band's official YouTube channel in full and has remained as they have cycled out others. It was also included in a CD & DVD limited edition that included the full music videos for "Don't Wanna Lie" and "Sayonara Kizu Darake no Hibi yo" as well.

An intimate show for only 1,500 people at SHIBUYA-AX had been announced as part of a Pepsi NEX promotion earlier in the year. Tickets to the show were available by redeeming points related to Pepsi products or by being entered into a lottery after purchasing C'mon. The event, which became Pepsi NEX presents B'z 1DAY LIVE, was held some months after the album's release in the midst of B'z LIVE-GYM 2011 -C'mon-. The LIVE-GYM tour saw all but two of the album's songs performed live, with "Too Young" and "Dead End" being excluded from any of the associated setlists. However, two years later, "Dead End" would be performed as part of the hall tour for B'z LIVE-GYM Pleasure 2013 -ENDLESS SUMMER- and would be included on the deluxe edition of its home video release.

During the release week, B'z were confirmed to have sold 80,000,000 total records by Oricon, the leading aggregating service charged with confirming and consolidating sales data.

Sayonara Kizu Darake no Hibi yo