The promotional image of the band distributed with the announcement of their plans for 2013.

The music video for "HEAT" included in the limited edition was filmed at Osaka Jo Hall during a stop for B'z LIVE-GYM 2012 -Into Free- EXTRA. The audience was informed during the show that the video would be filmed and, to Koshi's surprise, reacted very favorably to the idea.

Koshi and Tak from the "Kakushin" music video. The video, while not included in the limited edition package with those of the singles, was premiered on the band's YouTube channel. 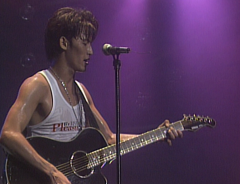 Due to some of the older singles being released without accompanying music videos originally, previously unreleased live footage of the songs was supplemented in their place here.

Along with the others in the package is a previously unreleased music video for "Mienai Chikara ~INVISIBLE ONE~". Only through one chorus was filmed before the shoot was canceled, as the band felt the video's theme to be too vague.

B'z The Best XXV 1988-1998 is the eighth compilation album by B'z released on June 12, 2013 as part of the band's 25th anniversary celebration. It is the first of a two album set collecting the band's first fifty singles, with its companion album B'z The Best XXV 1999-2012 being released the same day. As with its brethren, the album was issued in both standard and limited editions, with the latter being coupled with a bonus DVD collecting all of the promotional videos for the included singles. In addition to singles from the mentioned years, each album contain two brand new tracks unreleased elsewhere while the limited editions feature a new video for one of the bonus songs. Found packaged in this collection are the bonus tracks of "HEAT" and "Kakushin", with a video for "HEAT" being featured on the limited edition.

The singles compiled here constitute all twenty-six songs released by the band from their debut in 1988 to their tenth anniversary year in 1998. The first three B'z singles—"Dakara Sono Te wo Hanashite", "Kimi no Naka de Odoritai", and "LADY-GO-ROUND"—are collected here in their original forms for the very first time on a B'z compilation. It is also only the second time for fan-favorites "Taiyou no Komachi Angel" and "Real Thing Shakes", which were last collected in 1998 on B'z The Best "Pleasure" and B'z The Best "Treasure", respectively.

On April 4, 2013, "Kakushin" was announced to be the theme to the drama "Kumo no Kaidan" (Stairs of the Clouds), beginning with the April 17 debut of the series. The series, based on the works of Junichi Watanabe, had already been read by Koshi prior to their working on the song, with him saying in a statement that he had "taken into account the drama's theme and script" while preparing the lyrics. Similarly, as is his custom, Tak also read the script to the drama while preparing the music for the recording. One month later, on May 15, a short promotional video for the song was premiered on the band's YouTube channel. Only ninety seconds in length, the video was not included in the limited edition of the compilation.

In addition, this collection marked the debut release of "HEAT" by the band. Originally written for Korean artist Kim Hyun Joong, B'z had initially intended not to record their own version but did mention they would like to play it live. During the Pepsi NEX Premium Live concerts just prior to B'z LIVE-GYM 2012 -Into Free-, the song served as the only encore and was met with overwhelmingly positive reception. Two months later, it would return again as part of the setlist for the Japanese leg of the Into Free tour.

Upon release, B'z The Best XXV 1988-1998 debuted along with its sister album at the top of the Weekly Oricon Albums chart, with both exceeding sales of 370,000 copies and being certified Platinum within just three days. The release of the two albums came three days prior to the beginning of the band's 25th anniversary tour, B'z LIVE-GYM Pleasure 2013 -ENDLESS SUMMER-. The tour was announced with stops all over the whole of Japan prior to a pair of final shows at Nissan Stadium on September 21 and 22. In time, the album was certified Double Platinum by the Recording Industry Association of Japan with sales exceeding 567,000 physical copies.

This collection marked the first occasion in which the band released many of their music videos for home consumption. Notably, all footage has been remastered and restored for the greatest possible video fidelity. For older singles "ALONE", "BLOWIN'", and "MOVE" that were released without an accompanying music video originally, previously unreleased live performances of the songs from the B'z archives were supplemented in their place. The substituted video for "ALONE" was from B'z LIVE-GYM '91~'92 "IN THE LIFE", while "BLOWIN'" was taken from B'z LIVE-GYM Pleasure'92 "TIME", and "MOVE" was sampled from B'z LIVE-GYM '96 "Spirit LOOSE". Other singles without dedicated music videos, like "Taiyou no Komachi Angel", "Easy Come, Easy Go!", and "Itoshii Hito yo Good Night..." also received the live treatment.

At the time of the albums' announcement, B'z made 90 second clips available for the videos of all 50 singles for the very first time via their official YouTube channel. In addition, in the week preceding the release, a special program known as the "B'z 25th Anniversary Digest 1988-2013" was aired on Japanese streaming website Niconico. Upon completion of the airing, the video was made available for fans worldwide on YouTube. Clocking in at over 43 minutes, the video contains samples of all of the band's music videos, as well as a number of highlights from their many live performances and backstage footage.

The brand new music video for "HEAT" included in the limited edition package was filmed at Osaka Jo Hall during B'z LIVE-GYM 2012 -Into Free- EXTRA. In a December 2012 interview published in Be With! Vol. 96, Tak expressed satisfaction with being able to film it at the historic locale, while Koshi stated:

Due to previous publishing rights issues surrounding the early B'z catalogue when B'z parted ways with their former label, this release marks the debut of the first three singles in their original forms on a B'z compilation. Of the three—"Dakara Sono Te wo Hanashite", "Kimi no Naka de Odoritai", and "LADY-GO-ROUND"—the first had been previously re-recorded as "Dakara Sono Te wo Hanashite -Mixture style-" for B'z The "Mixture" in 2000, an album co-published in tandem with their previous label in a compromise agreement. For this release, the songs were remastered akin to the treatment given for older songs on B'z The Best "ULTRA Pleasure" and B'z The Best "ULTRA Treasure".

Prior to release, it was announced that Japanese TV production station TV Asahi would be opening a new venue in the coming winter known as the EX THEATER ROPPONGI. To commemorate the occasion, B'z was to hold a special, smaller scale show as the debut performance for the new venue with only twin pairs of 850 tickets available. In order to gain entry to the shows, fans were required to register cards contained in their copies of both B'z The Best XXV sets. One code from each was required, with the show set for November 30, 2013. The resulting show B'z Special LIVE at EX THEATER ROPPONGI resulted in a very diverse setlist that contained a great many gems that hadn't been played live in some time, the stage debut of a new song, and a memorial cover of the 1985 LOUDNESS song "Crazy Nights".

All music and guitar by Tak Matsumoto. All lyrics and vocals by Koshi Inaba.

The limited edition of the compilation comes packed with a bonus DVD that, for the first time, brings together the promotional videos prepared for all of the twenty-six included singles as well as a brand new video for the exclusive song "HEAT".