Tak and Koshi as they appear in the "FIREBALL" promotional video. The video was shot on a stage and features pyrotechnics throughout. 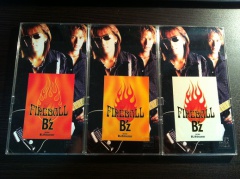 The three variants of the "FIREBALL" single. The single was an ode to classic rock and roll, having been produced without the aid of computers or synthesizers. Source

FIREBALL is the twenty-first single by B'z, released on March 5, 1997. As is mentioned inside of the single with the imprint 「No synthesizer & No computer used」, both the title song and B-side were produced raw without any digital aid of any kind. Uniquely, Tak Matsumoto not only played his usual role of guitarist on the single but also provided bass on the title track. In addition, ten months had passed since the release of "Real Thing Shakes", creating the longest interval between such releases in their career to that point. Shortly after its released, it served as the title song to B'z LIVE-GYM Pleasure'97 "FIREBALL".

Production on the single took place in December 1996 after Tak had returned from studying and living abroad in the United States for three months. While there, he listened only to American music, which led to him beginning to think, "Why are there so many purposeless sounds in Japanese music?" This recognition of the over-produced route music was taking is what led to the stripped-down approach taken with this release. The theme of the recording was an experiment in producing a work of "all live sound", which involved scaling back the usual production associated with a top hit in the music industry at the time. This experiment of "all live sound" began with "Real Thing Shakes" though synthesizers were added to that track unlike for those on this single.

Of their many works, "FIREBALL" is considered one of the more obscure B'z singles, with relatively few live performances and only three album appearances. The song was first collected on 1997's SURVIVE before being voted onto B'z The Best "Treasure" by fans the next year. It would not find its way onto another B'z release until the all-singles collection B'z The Best XXV 1988-1998 hit shelves in 2013.

At the time of release, the title song served as the theme to a commercial promoting Shiseido's "PN" line of cosmetics, which would be their flagship brand from launch through August 2005. The single was also released in three different colored variants when it was originally published. The actual design was not determined until the last minute, with Tak suggesting fans may like the choice of seeking out the design of their preference amongst the red, orange, and white covers.

As additional promotion, a music video was also filmed for the single. The video features Tak and Koshi performing the video on a sound stage complete with generous pyrotechnics throughout its duration. The single was also performed twice on television, once on Music Station on February 21 and shortly thereafter on HEY!HEY!HEY come March 3, which was the band's first appearance on the Fuji TV program.

When released in 1997, "FIREBALL" topped the Weekly Oricon Singles charts with over 425,000 copies sold. It ranked second for March 1997 and was the 24th highest-selling for the entire year of 1997 after having spent 11 weeks on the charts. The single would ultimately go on to be one of the band's many singles to sell over 1,000,000 copies, having been certified as Million by the Recording Industry Association of Japan.