Strings Of My Soul

Strings Of My Soul is the ninth studio album by Tak Matsumoto, released on June 20, 2012. Following its domestic Japanese release, the album was issued physically and digitally in the United States and Europe by 335 Records on August 7, 2012. The release is between a traditional studio album and compilation, featuring both new and old tracks alike with previously released songs featuring re-recorded guitar alongside numerous other updates throughout. Included in the limited edition of the Japanese release was a DVD disc containing all of Tak's solo music videos to date along with previously unreleased live footage from B'z concerts as well as excerpts from Tak's showing with the Tokyo Metropolitan Symphony Orchestra in 2004. 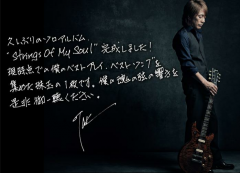 Release Message:
"This is my latest solo album Strings Of My Soul! The CD contains all the gems I consider the best and have played the best. Please feel free to listen to the sound of the strings of my soul." 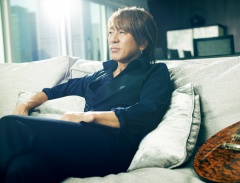 Tak in an alternate promo image with one of his signature Double Cutaways. For the recording of the album, Tak used his custom Double Cutaways from Gibson, a 1958 Les Paul Gold Top, a 1954 Fender Stratocaster and Martin and Yaili acoustic guitars. 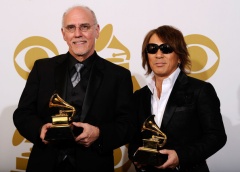 Tak Matsumoto & Larry Carlton at the 53rd Annual Grammy Awards on February 14, 2011 where TAKE YOUR PICK took home Best Pop Instrumental Album. The collaboration led to Larry and his 335 Records label collaborating with Tak on this release.

The album would be the work that was Tak's first created with an international team at heart, with Tak producing the album alongside Paul Brown and Robert Williams, the president of 335 Records. Williams was also asked by Tak to give input on which songs should be included on the release. Brown, an engineer, mixer, producer and fellow Grammy Award winner alongside Tak also co-wrote the lyrics to the album's only vocal song, "Live Life", with Dax Reynosa as well as contributing to the arrangement. Several months following the album's release, the track was released as a digital single in the United States and Japan with both a new instrumental version and the original vocal rendition included.

Larry Carlton, with whom Tak had previously teamed for their East-meets-West jazz album TAKE YOUR PICK in 2010 that subsequently won the Grammy Award for Best Pop Instrumental Album, returned to join Tak on guitar for a cover of the popular 1961 song "SUKIYAKI". The song is the only Japanese-language song to have reached number one on the Billboard Hot 100 in the United States and thus was considered an apt choice to cover for the album. While mostly a release of originals, two other covers are also included, being "MY FAVORITE THINGS" from The Sound of Music as Tak had covered from Theatre Of Strings in 2005 and "Romeo & Juliet" from the 1968 film of the same name that was originally covered on Hana.

Strings Of My Soul debuted at number four on the Weekly Oricon Albums chart and was the winner of Best Instrumental Album at the 27th Japan Gold Disc Awards. The album is available internationally on various outlets in both physical and digital forms, being sold on Amazon in both forms as well as being available on iTunes in several countries.

The genesis for the album came about as Tak was looking to produce an album that culled his most representative solo material to date into a single work. In an interview with Gibson's online website, Tak described the album as different from his B'z output in that the album was "basically instrumental, more bluesy and mellower". Tak wished to establish a "melodic story of guitar instrumentals" with the work and decided to re-record the guitar work for consistency throughout the album. In the press release for 335 Records, the company that distributed the album internationally, he said of the release:

The title of the album is drawn from an instrumental composition of Tak's from the B'z double album The 7th Blues in 1994. While the song itself is not included on the album, two different performances are included on the bonus DVD. Tak mentioned at the time of release that while he felt the title lended itself very well to the project, the song itself was not one he saw as mixing well with the other tracks.

While fundamentally the same, differences exist between the Japanese and international editions of the album. The tracks "#1090 Sen Mu Ichiya", collected here but originally from 2002's Hana, and "99", originally from 1992's Wanna Go Home, were not included for the international edition, leaving "The Moment" and "Romeo & Juliet" to open and close the album, respectively. Additionally, the album's cover of "SUKIYAKI" featuring Larry Carlton was given a different mix in the international edition compared to the original, while "THE WINGS" would be shortened with slightly different guitar work outside of Japan. Work from the album was later played consistently on various genre radio stations in the United States at the time of release.

The album was met with extremely positive reception in foreign markets that had previously been unfamiliar with Tak's music. Wave.fm awarded the album a glowing review, stating, "The man can play any style, any time and play it astonishly well" and adding, "Breathtaking. That’s all I can say. Absolutely exquisitely breathtaking. Drama, poignancy, rockin’ riffs and oriental nuance, Tak finds it all and steals my breath in the process." Allmusic.com likewise reviewed the album positively, writing, "There are moments when the crackling rock energy simmers down to a vibe that would fit comfortably in the smooth jazz format, but even on those, Matsumoto's precision and intimacy (with the expectation of powerful explosions in the distance) are awe-inspiring."

All music composed by and guitar performed by Tak Matsumoto unless otherwise noted.

The international edition released in the United States, Canada, and Europe by 335 Records contained eleven tracks, with "#1090 Sen Mu Ichiya" and "99" removed from the original track listing. This was done as the producers feared the two songs would not appeal to Western audiences. "The Wings" has been shortened and edited, while "Sukiyaki" features a different sound mix than the Japanese release. Apart from these differences, the releases are the same.