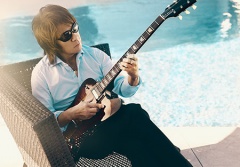 The promo image of Tak distributed with the announcement for the album's release. The album was titled New Horizon as it is a work in which Tak wanted to explore new avenues he had not yet taken in his musical career.

Tak Matsumoto performing with the Tokyo Metropolitan Symphony Orchestra in 2004 as part of a special collaboration. "BLACK JACK" was among his solo and B'z songs chosen to be performed. The song was entirely re-recorded in jazz form for this album.

The special vinyl set that was announced as being available in an extremely limited quantity of only 300 copies. This special edition is only available to those that purchase the album and redeem the special offer card inside prior to the deadline.

Tak performing "Rain" during B'z LIVE-GYM Pleasure 2013 -ENDLESS SUMMER- as his solo. The song's inclusion in the setlist is just one of several occasions in which he debuted a solo works composition during a B'z tour, such as with "SACRED FIELD" during B'z LIVE-GYM 2001 "ELEVEN". 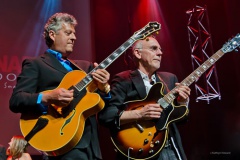 'Tak on producer Paul Brown, performing here with previous Tak collaborator Larry Carlton:
"Paul is producing a lot of people, plays the guitar, and releases his own works. He is really amazing. I really think that we produced something amazing here."
—Tak Matsumoto, Be With! Vol. 101 (March 2014) 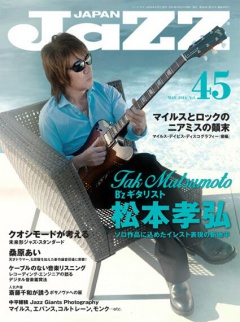 Tak on the cover of Jazz Japan magazine. His reputation as a jazz musician had its roots in his 2010 collaboration with Larry Carlton, TAKE YOUR PICK. 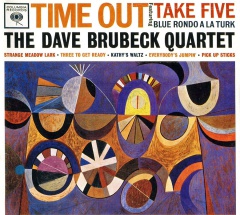 One of three covers found on the album, "Take Five" is known as one of the founding pieces of jazz. Composed by Paul Desmond and originally released in 1959, this is Tak's second cover of the song following his first attempt 26 years earlier on Thousand Wave.

New Horizon is the tenth studio album by Tak Matsumoto, released on April 30, 2014. As with Tak's previous album Strings Of My Soul, the album is also scheduled for an international release at a later date and will again be produced by Tak alongside 335 Records' Paul Brown. The cover of the album and various promotional materials feature Tak's new signature Gibson Firebird guitar.

The theme of the album was to explore arenas that Tak had not yet experienced in his musical career thus far. Unlike with the oriental-themed Hana and hard rock release of DRAGON FROM THE WEST, New Horizon sees Tak journey more into the jazz style he began cultivating in his 2010 and 2012 releases. In addition to highlighting guitar in ways he had not previously, the album also features solos for various other instruments, all of which were played freeform. Tak described the album as containing more variety than his past works, with the general makeup of the album being quite different to the rest of his catalogue. As with his previous release, the album features a vocal song in addition to its variety of instrumental offerings with American soul singer Wendy Moten as guest performer. The lyrics to the song, titled "Feel like a woman tonite", were again written by Dax Reynosa who had done the lyrics for "Live Life" on Strings Of My Soul.

The only tie-in promotion for the album came with the title song "New Horizon" being featured in a series of Sagawa Express commercials. Tak met with the producers of the television spots, viewed the footage of the commercial, and chose a section of the song he felt most suited the project from those he had recorded. In an additional promotional campaign offer announced on April 18, 2014, it was revealed that copies of the album would come packaged with a special card that could be redeemed to earn a chance to win one of 300 specially-pressed vinyl editions of the album.

The album was supported by his first true solo tour, Tak Matsumoto LIVE 2014 -New Horizon-. The tour, which ran from May to June of 2014, featured new and old support members for the shows, including Yoshinobu Ohga, who has worked with both Tak in his solo efforts as well as numerous recent B'z live outings.

According to an interview in Be With! Volume 101, work on the songs that would eventually find their way onto the album began sometime in 2012. However, due to commitments stemming from the 25th anniversary for B'z and the subsequent tour, Tak put the album on hold temporarily. While the work's songs were composed over a period of roughly two years, actual production on the album began in December 2013 and was completed quickly in only a matter of months.

Tak explored a great number of ideas for the album. Initially, he wasn't sure what type of tracks to include on the work, as recounted in Be With!:

For the release, Tak hadn't considered a collaboration with another artist unlike in 2010 or with an orchestra as in 2004. This was a work he intended to begin a new chapter of his career after his previous album's retrospective status serving to allow him to move on to new endeavors. After the B'z tour finished and he was entirely free, Tak had a small window of time with which to decide how the project would go:

Tak again entrusted Paul Brown from 335 Records, the record label of friend and colleague Larry Carlton who would be releasing the album overseas, with advising aspects of the production. This time around, Brown was involved in the mixing process, as well as with selecting and ordering tracks for the Western release and also introduced Tak to many of the support musicians that make appearances on the album. Tak mentioned that the resulting recording sessions went very smoothly and were very productive. Specifically, he mentioned Brown as helping a great deal and bringing out the most in each song, entrusting him with many of the songs and with mixing:

The compositions for the album differs a great deal from Tak's previous works, as he felt he had full instrumental freedom this time around. As a result, it led to new territory, such as wind instruments serving as a primary instrument for the first time in one of his works. Tak stated that while he composed freely for the album, he may have deliberately added jazz sections here and there. Notably, all of the solos of the non-guitar instruments are played as improvisations. For his guitar parts, Tak would not call them spontaneous improvisations exactly, instead stating that:

In a number of instances throughout the album, Tak played with not just a guitar pick but utilized only his fingers as well. Additionally, Tak repeated that he recorded the guitar parts for the album the same way as he does during B'z sessions: for each song, he would continuously play a given melody over and over with different guitars until he found the one that was most suitable for the song in question. He noted while he's seen others that spend hours and even days attempting to find the right tone, he generally reaches that point quite quickly and decides, "This is it" early on and goes with it. Tak likewise reiterated that his aim with the album was the same as his goal with all of his work, which was to create the kind of music he would like to listen to himself.

The release of the album was promoted prior to making it to store shelves in a number of different avenues, including television, internet coverage, magazine featurettes, and radio appearances. On April 21, Tak appeared on Tokyo FM to discuss the album and his career, during which album tracks "Gakuseigai no Kissaten", "New Horizon", and "Feel like a woman tonite" were previewed at length for the first time.

While no music videos were filmed for the release, two brief television commercials for "New Horizon" and "Rain" began airing in the weeks leading up to the album's release.

All music composed by and guitar performed by Tak Matsumoto unless otherwise noted.

As with Tak's previous solo album Strings Of My Soul in 2012, the album is again tentatively scheduled for an international release following the domestic Japanese launch. Paul Brown again produced the album and will oversee its western release. Brown assisted not just in the production but also the mixing and ordering the track listing for the Western release. Tak mentioned in an interview with B'z fanclub magazine Be With! that the details of the Western edition were not "set in stone" just yet and there were still decisions to be made. He mentioned going through the album track-by-track with his production partners to decide which tracks were good fits for the American market, with unfit tracks set to be left out.

On April 27, 2014, Amazon.com listed New Horizon for pre-order with an expected release date of July 8, 2014. By May, the release date on the website had been set for September 9, 2014. Currently, the date of release has been left as undetermined.