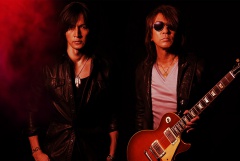 The promotional shot showcased on the official website to promote the release, as well as included in various media promotions at the time.

RED is the fifty-second single by B'z, released on June 10, 2015. It is their second single of 2015 following the release of "Uchouten" six months earlier, and is the band's first non-album single since 2012's "GO FOR IT, BABY -Kioku no Sanmyaku-". Of special note is that the single is only the second in the band's entire catalogue—following 1996's release of "Real Thing Shakes"—to contain only one track. Although the song initially went without being collected in the year of its release, in 2017 it was collected for the first time as part of B'z COMPLETE SINGLE BOX.

Additionally, the song was not planned for immediate release as a single but an effort to release it was put in place due to fan demand. The song premiered on March 29, 2015 when it was played as the mound music for Hiroshima Toyo Carp pitcher Hiroki Kuroda, for whom the song had been written. This would mark the first occasion in which B'z had composed a personal theme for another individual.

A preview of the dedicated music video for the title song—the full version of which would also be included in a special CD and DVD edition of the single—was launched on the band's official website on April 22, 2015. The video incorporated the first public footage from B'z LIVE-GYM 2015 -EPIC NIGHT-, using portions of the band's live performance from the showings at Yokohama Arena overlaid with new footage of Tak and Koshi on a sound stage along with fire-infused CGI.

Two additional tie-in promotions were announced for the single leading up to its release. "RED" would serve as the June 2015 theme to NTV news program Sukkiri! and as the theme to a pair of SKY PerfecTV! Hiroki Kuroda commercials for their baseball season coverage.

The single premiered at the top of the Weekly Oricon Singles chart upon release, becoming the band's forty-eighth consecutive single to do so. With over 157,000 physical copies sold in its first week, the single became the band's biggest debut of the sort since 2011's "Don't Wanna Lie". "RED" also premiered at the top of the Monthly Oricon Singles chart and was ranked 32 for the year of 2015. It has since been certified Gold by the Recording Industry Association of Japan with sales of roughly 200,000 physical copies moved.