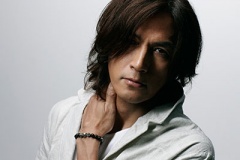 Promotional image revealed at the time of the single's sudden release. The single is Koshi's first digital exclusive single and his fifth to date, following previous solo releases in 1998, 2003, 2004, and 2010.

Nensho (念書, Written Pledge) is a digital exclusive single by Koshi Inaba, released on February 26, 2014. The single is his fifth in total, with the previous entry, "Okay", coming in 2010. The single was released simultaneously with the launch of Koshi's own solo website, en-zine, on which an excerpt of the song was used as background music throughout the website. The single was made available at launch on the Japanese iTunes service as well as other digital music platforms in Japan, including mora, Musing, Recochoku, music.jp, dwango, and Being GIZA Studio's own web store.

With the release of the single and launch of his own website, Koshi's music video for "Nensho" was also made available in full on the official B'z YouTube channel. Koshi himself does not appear in the video, which employs extensive visual effects built around the theme of the lyrics.

All music composed by, lyrics written by, and vocals performed by Koshi Inaba.